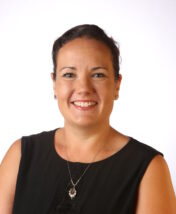 Angela graduated with a BSc (Hons) from the University of Melbourne, co-majoring in marine biology and environmental science. She completed a PhD on parental effects in broadcast-spawning marine invertebrates at the University of Queensland with Prof Dustin Marshall, producing some of the first evidence that sperm plasticity has adaptive effects for both fertilisation success and offspring fitness. After her PhD, she completed a postdoc with Prof Russell Bonduriansky at UNSW Sydney, investigating mechanisms of non-genetic inheritance in the neriid fly. Together they demonstrated that offspring fitness can be influenced by the diet of a previous mating partner, reinvigorating the concept of telegony.

In 2012, Angela was awarded an ARC DECRA Fellowship, and in 2016 she was awarded a Postdoctoral Fellowship from The University of Sydney. She has received several awards for her innovative research, including the L’Oreal-UNESCO For Women in Science Australian Fellow in 2016 and NSW Young Tall Poppy Scientist of the Year in 2017.

From one ejaculate to another: Transference of sperm traits via seminal plasma supplementation in the ram. Green, C., Rickard, JP., de Graaf, S.P. & Crean, A.J. (2020) Biology 9:33.