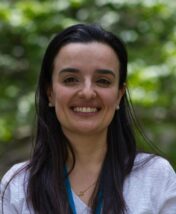 Dr. Débora Sobreira has a degree in Biological Sciences from University of Campinas (Unicamp) in Brazil. She received her M.Sc. and Ph.D in Genetics from Unicamp by general ‘rules’ governing the regulation of multi-potent mesodermal precursor cells in the context of limb birth defects and human diseases. She unveiled a role of the Dact gene family as modulators and integrators of Wnt and Tgf-β signaling pathways during limb development, providing insights in intracellular regulatory networks. Studying how regulatory programs govern development she became interested in how gene regulation and genetic variation contribute to diseases. Thus, for her postdoctoral training, she joined the lab of Prof. Marcelo Nobrega at the University of Chicago to explore gene regulation in the context of complex diseases.

Dr. Débora Sobreira has used genomics technologies to address how noncoding variations lead to phenotypic variation. She is interested in understanding the consequences of genetic variation on molecular, cellular and organismal traits using a comprehensive set of genetic, molecular, and developmental biology methods. In that context, she has successfully pursued noncoding GWAS hits, establishing experimental strategies for the identification of long-range regulatory elements and the demonstration that genetic variation within these regulatory units often underlies the association signals emerging from GWAS. Using various experimental platforms ranging from cell culture to whole-systems in vivo, she has developed and standardized assays to test for variety of questions involving the genetic architecture of complex traits and the functional consequences of noncoding variation in loci associated with diseases such as obesity and diabetes. These studies have resulted in a number of fundamental discoveries that challenged previous paradigms and paved the way for the functional follow-up of genetic associations.