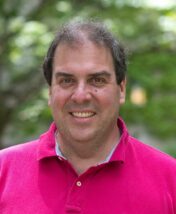 Marcelo Nobrega is a professor at the Department of Human Genetics at University of Chicago. He is also the chair of the Genetics, Genomics and Systems Biology graduate program.

Marcelo grew up in Brazil, where he graduate from medical school in 1995. Moving to the USA, he pursued his PhD at the Medical College of Wisconsin, in Milwaukee, WI, graduating in 2001 with a degree in Physiology and Human and Molecular Genetics studying the genetics of diabetes complications. He joined the lab of Edward Rubin in Berkeley, California, where he pursued his postdoctoral training in dissecting the functions of gene deserts, which resulted in the discovery of long-range regulatory elements scattered in the genome.

Establishing his lab at the University of Chicago in 2005, Marcelo set out to characterize the impact of genetic variant in regulatory elements in human diseases and phenotypes. The Nobrega lab has published on how regulatory variants impart their phenotypic effects using a number of disease platforms including obesity, diabetes, asthma, preterm birth, cardiovascular diseases and cancer.