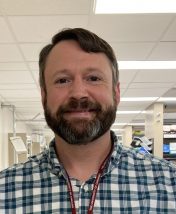 Rob was born in Elgin, Illinois (USA) and attended Northern Illinois University where he studied biochemistry and biology. He received his PhD in Molecular and Cellular Biochemistry from Loyola University Chicago and was a postdoctoral fellow at the NIH in Bethesda, Maryland. While at the NIH  he studied ErbB4 receptor signalling in GABAergic interneurons with Andres Buonanno and then interneuron electrophysiology with Chris McBain. Rob had a brief tenure as a Research Scientist studying NMDA receptor pharmacology at Aptinyx Inc. before joining the lab of Marcelo Nobrega at the University of Chicago as a staff scientist.